This is a guest blog kindly written for us by John Beales.  John is a former nurse, and worked in the NHS from 1983 until 2000.  He is now undertaking a Masters degree in History at the University of Bristol. 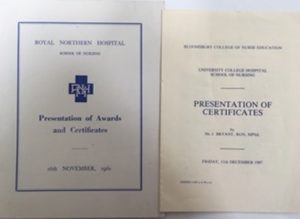 These two records of the presentation of certificates for the completion of nurse training and badges awarded upon qualification in 1961 and 1987 are separated by more than just time; they subtly reveal the changing nature of nurse training. At the Royal Northern Hospital in London, where my mother trained as a State Registered Nurse, in order to receive a certificate of training and the coveted hospital badge you had to complete a fourth year of ‘training’ by working as a staff nurse at the hospital for a year after qualifying.  The Chief Physician, Chief Surgeon, Hospital Chairman and the Matron signed her certificate of training.  When I qualified as a Registered General Nurse at University College Hospital in London in 1987 you received a hospital badge when you completed the 3 year training, and my certificate was signed by the Director of Nurse Education and the Chief Nurse Advisor; nursing having freed itself from the dominance of Medicine and having established specialist nurse tutor roles.  The signs of the changes are there in the absence of the Matron as the exemplar of authority within nurse training and their replacement with a Director of Nurse Education.  The differences are also there on the covers of the presentation booklets, the ‘University College Hospital School of Nursing’ being dually identified as the ‘Bloomsbury College of Nurse Education.’

But in reality the focus was still on training rather than education. Whilst changes in the role of nurses, the availability of sterile supplies, changes in service provision and technology meant that I did not have to cook patient’s breakfasts, perform the regular ward and theatre cleaning and manual cleaning and sterilising of equipment that were a feature of my mother’s training, my own training was still predominantly practical, focusing on ‘hands-on’ care and skills acquisition: blocks of shift-based clinical placements lasting roughly 8 weeks being interspersed with weeks of classroom teaching. As a student nurse you were part of the workforce, rather than being supernumerary, and I recall plenty of instances where students were left in charge of wards or other clinical areas, this being part of your ‘management training’, as well as a result of expediency if there were instances of staff sickness or errors in shift rota planning. However, my mother and I both recall that our training gave us realistic expectations of the nature and variety of nursing practice and fostered both an esprit de corp and an allegiance to our training hospital: the award, and wearing, of your training hospital badge when you qualified being something to be proud of. 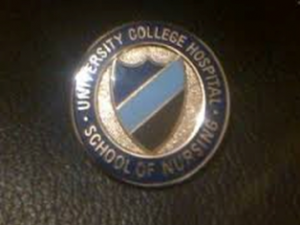 Nursing degrees were rare when I qualified and the practice-based nature of nurse training meant that most courses lacked wider academic recognition. Change was inevitable due to both the need to ensure that nurses were prepared for the rapid pace of developments in care delivery and the desire for recognition as a profession. Project 2000, introduced in the 1990s, began the move from hospital to university based nurse education. Many commentators have gone on to bemoan this change, blaming it for a perceived loss of ‘compassion’ in nursing and the fostering of unrealistic career expectations. I think that both of these have been overstated. But, an area that seems to have been overlooked is the way in which hospital based training, and the award of your training hospital badge when you qualified fostered a sense of belonging amongst nurses in the NHS, and how that has been diminished since the move to University based education; clinical placements now normally taking place at a variety of different hospitals. In the absence of the award of qualification badges by universities, and a move away from the wearing of them due to concerns about infection control and patient safety, the most common place you find these badges now is on online auction sites. Now retired after a 48 year long career in the NHS my mother still has her training hospital badge. I left the NHS in 2000. Last year I sold mine on e-bay. 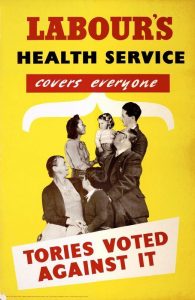 This blog post was kindly written for us by April Stephenson, who works at the People’s History Museum in Manchester.

This poster was produced as part of the Labour Party’s 1951 general election campaign. The election was unusual in the fact that it was called by the Labour Party, a year into Clement Attlee’s term as Prime Minister in a bid to increase the Labour parliamentary majority. Rather than achieving this, it resulted in the return of Winston Churchill and a Conservative win. Labour did however win the popular vote with 48.8%. The NHS had been formed in 1948 and formed a key part of the Labour campaign, and the Conservative campaign chose not to propose any alterations.

This poster shows that the NHS has been involved in election campaigns from its foundation. In 1951 the NHS stood as an emblem for post-war values, a clear incentive to vote. The NHS continues to feature heavily in political campaigns – often resulting in debate – from the ‘battle of Jennifer’s ear’ fiasco in the 1992 General Election, to the Brexit buses of 2016. This poster represents the Labour Party’s active role in the NHS’s past, and as such has been re-used since 1951 by the party as a symbol of their commitment. The poster can still be purchased from the party to this day, and in 2015 was produced as a tea towel during the party’s election campaign.

The simple eye-catching design now hits a nostalgic note which ensures its continued popularity, whilst remaining relevant to the political situation today. The NHS remains a heavily contested point within political policy, which affects everyone it covers.

This blog will be the first in a new series, ‘My favourite NHS object’,  where anyone and everyone is invited to tell us what their favourite object is in our Virtual Museum of the NHS, and why.  Using these answers, and feedback from our public events and surveys, we will be redesigning our Museum, creating a new catalogue and adding content.  To help with this, please email Jenny Crane, at J.Crane.1@warwick.ac.uk.  Any and all contributions are very welcome!  What are we missing, what should we change?

Young Historians Project @yhp_uk
Only ONE more week until the launch of our online exhibition, which will mark the beginning of our launch series. The exhibit…
22 JulRetweeted by NHS History
ReplyRetweetFavourite