An auction in Dundee this evening raised £883,000 for charity. Over the summer the Oor Wullie’s Bucket Trail had seen 55 statues of the iconic Sunday Post comic strip character on display all over the city (as pictured above). The statues were auctioned off to raise money for the ARCHIE Foundation’s charity appeal to support a new theatre suite at the Tayside Children’s Hospital.

In just a few years it’s become surprisingly normal to see these public art trails around Britain. The script is always more-or-less the same. A big fuss is made as a huge number of roughly person-sized statues go up all over local landmarks, shopping areas and in well-known public buildings. Each one is from the same mould, but has been painted by a different (usually local) artist. Families pose for photos as they try to find them all. Then, after a few months, they’re auctioned off to raise money for charity.

We may have gotten quickly used to seeing all these statues, but where did they come from?

Surprisingly enough, the answer is Switzerland (via Chicago).

In 1986 Zurich became home to painted statues of lions, the city’s symbol. Twelve years later this was the inspiration behind artistic director Walter Knapp’s ‘Land in Sicht’ public art exhibition of life-sized painted fibreglass cows, which were auctioned off for charity. The next year the idea was mimicked by a Chicago businessman for the ‘cows on parade’ exhibition, which has since been taken to 79 cities around the world, from Sydney to Istanbul and Rio de Janeiro to Shanghai, with local artists painting the statues and the auctions raising money for local charities. These public art trails have mostly been very popular, despite the occasional controversy. Such as when David Lynch’s gruesome Eat My Fear cow design was rejected for the New York exhibition, or when the Militant Graffiti Artists of Stockholm kidnapped one of the fibre-glass cows in protest at their corporate sponsorship. “Advertisements can never be art”, they declared as they threatened to decapitate the cow unless there was a public statement that they were “non-art”. No such statement was forthcoming. The fibre-glass cow was decapitated.

Although the cows soon arrived in London, Manchester and on the Isle of Wight, it took a decade for a British spin on the idea to come about. Liverpool’s popular Superlambanana – Taro Chiezo’s 17 foot high yellow statue of a lamb with a banana for a tail, which had appeared in the city’s Albert Docks in 1998 – became the model for 124 two metre high mini-Superlambananas around the city. This Go Superlambanas! exhibition was part of the City of Culture programme in 2008, while the statues were auctioned to raise money for the Lord Mayor’s Charity. 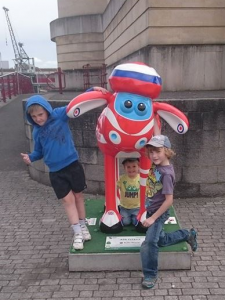 This became the model for a new wave of public art trails in towns and cities around the UK, often run by the same Wild in Art company behind Go Superlambanas! The first of these tended to raise money for arts and environmental charities, as with Wow! Gorillas in Bristol in 2011, but since there have been a huge range of different themes and causes. There were barons in Salisbury for the Trussell Trust, lions in Bath for a young carers charity, dragons in Newport for a vulnerable young people’s charity, and toads in Hull for environmental projects.

Children’s charities and particularly children’s hospitals, however, have become a common choice. This is due in part to two art trails in Bristol for the Wallace and Gromit Appeal for the Bristol Children’s Hospital – with statues of both 80 Gromit and 120 of Shaun the Sheep (pictured right). The Gromit Unleashed auction in 2013 raised £2.3million and 2015’s Shaun in the City auction a further £1.1million, with the sale of merchandise and spin-off events as far afield as Hong Kong bringing in more than £4.5million and counting. Beyond Bristol, children’s hospitals had received the funds raised from the auction of Dolphins in Aberdeen two years ago, of Birmingham’s Big Hoot owls (pictured above) a year ago, and of the Oor Wullies in Dundee this year; and it’s set to continue with bears in Birmingham next year.

For all the visibility of its incredibly successful branding, there are times when the NHS is hidden. And, despite its popularity, the NHS remains firmly in the small print of these charity art trails and auctions. To some extent, the charity in general is kept distinctly backstage. While entertaining community events have raised money for local hospitals and supporting charities throughout the history of the NHS, it wouldn’t be entirely unfair to say these are part of a new generation of public activities putting the fun back into fundraising. But the NHS is one step again behind the children’s hospital as the focal point of the charity auction.

And this speaks to a thorny issue running through the NHS’s history. Namely, that it can be a cash-strapped beloved national institution, a rallying cry for popular sentiment, and yet still seen as an improper recipient of charitable support. Giving money is  a way of showing support, but at the same time an abandonment of perhaps the most important founding principle of the NHS: that paying for the health services we collectively require is the responsibility of the government. It may be deeply popular and going through some tough times, but in terms of where we might want to send our cash, the NHS will always be a far more complex good cause than sick children.