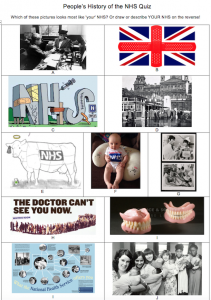 What a fun evening! The members of the Dunchurch Ladies Choir kindly allowed us to try out one of our brand new ‘People’s History of the NHS’ quizzes, so here, we thought we would ‘hand back’ their results. You can see the quiz above — and take it yourself here! It asks people to choose just ONE image to represent their own NHS: what it means to them, how it has featured in their lives, or how it makes them feel. And these are the results:

23 choristers took our test, and their responses showed a very interesting trend: there is no SINGLE or even a couple of dominant images of the NHS: it means different things to different people, even when individuals  have many other things in common.  So on this quiz, the image that was selected most often to represent the meaning of the NHS was (drum roll please!):

Image C, of the rather battered and broken NHS! This outcome probably reflects wider levels of concern amongst NHS users and the general public that the NHS is at risk, run down, or broken. However, only five of twenty-three people chose this picture (with one more including it among a number of options).

The next two most popular images were happier: four people each selected Image I, showing all the different services that the NHS offers us all, and image J, the group of young mums from every background holding their beautiful babies — all delivered in an NHS hospital. Each picture had one more vote, too, from an individual who selected a number of images to represent her NHS. So these positive images were NEARLY as popular as Image C.

Three people chose Image B, the NHS Union Jack, indicating that the association between the NHS and Britishness also remains strong. This is something we have seen often in our research. We think it suggests that the NHS, for all its woes, remains a source of pride and identity for communities in Britain.

Two people also chose Image H, ‘The Doctor Can’t See You Now’ — one adding a note of personal tragedy to explain her choice — and two chose Image F, our lovely ‘Born in the NHS’ baby.

Overall, it seems that feelings about and associations with the NHS are varied, mixed, but strongly held. What do you think? Do tell us below!

NHS History @NHSHistory_
Today we've been revisiting our gallery, peopleshistorynhs.org/galleries/here… Click on the portraits to read more - lots of insp… twitter.com/i/web/status/1…
About 20 hours ago
ReplyRetweetFavourite

NHS History @NHSHistory_
This is a great poster for #InternationalNursesDay — and I bet there are more like this in the TUC collections held… twitter.com/i/web/status/1…
10:50, Wed
ReplyRetweetFavourite