The People’s History of the NHS project aims to collect memories, stories, and opinions from as many people as possible, in order to inform the research questions and work of historians, other academics, and also policy-makers and researchers.

With this in mind, we have organised multiple physical events: with Museums, hospitals, art galleries, local history societies, and campaign groups.  Our upcoming events can be found here, please do join us!  We also try to extend the reach of our work through this website.  It is free, quick and easy to sign up, and then ‘myNHS members’ can see the memories which others have shared, and contribute their own.

So far, we have received 76 memories, many of which relate to campaigning around the NHS.  These submissions have really enriched my research into this area, and changed the nature of the questions which I’m asking of my archival materials.  Mostly from our responses I’ve been very struck by the variety of campaigning around the NHS – from the work of Leagues of Friends to raise money for new equipment, to marching and protest in various areas, and campaigns through letter-writing, petitions, and legal challenges.  The submissions have already started to give me some idea in to how NHS campaigning has changed over time – for example from multiple local groups to a more cohesive national movement, trying to mobilise collectively to defend the NHS as a whole, rather than local hospitals.  One submission suggested also that campaigning had moved to some extent from outside, protesting, as protesters had aged, and media and police come to manage such activism more.  Instead, the contributor argued, much campaigning was now done through letter-writing, Freedom of Information requests, petitions, and, of course, using the virtual space of the internet.  The extent to which the internet has been a good thing for campaigners – spreading the message, engaging new audiences, linking disparate groups together – or a bad thing – leading to lazy ‘clicktism’, dissuading political action – has been a regular debate in responses to my survey for NHS campaigners.

Another fascinating question raised by contributors is about the extent to which pro-NHS campaigning is radical, given that this Service has rated very highly in public opinion polls since its inception.  One member argued that this was radical, because promoting democratisation of the NHS placed campaigners up against large and powerful bodies – particularly the Trusts and the Clinical Commissioning Groups.  Another question raised is the extent to which NHS activism, or indeed activism in general, may be generational.  One of our submissions is from a campaigner who mobilised in 2010, because she saw changes being made to the NHS, and also in that year received papers from her father, defending the Service as early as the 1950s.  In one speech, made in 1955 to an American audience, the father argued against the idea in American media that a medical service run publicly was ‘both inexpedient and morally wrong’.  Rather, he argued, that the NHS cost a similar amount to the American health system, and yet was also ‘there for 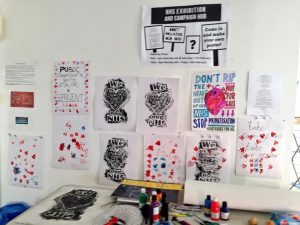 all’, reliant on the ‘venerable principle’ that everyone would contribute to the care of the sick.  His argument was both based on statistics and information, as a scientist, and on a moral call about entitlement and welfare: two strands which continue to be key to NHS campaigning today.

We’ve also received brilliant visual culture about campaigning through our website.   We have received for example pictures from Stroud Against the Cuts of their exhibition and campaign hub run in February 2017 in an empty shop on Stroud High Street (see left).  We have also received photos of placards, t-shirts, and leaflets from Leeds Hospital Alert; a group founded in 1981 in response to Kenneth Clark’s proposal to allow hospitals to ‘opt-out’ of local authority control (see banner image).

My research looks to understand different types of NHS activism; how these have changed over time, and when they have been successful, or not.  Looking at historical archives, I can see how campaign groups were received by media, politicians, think-tanks, and legal and medical professionals.  However, it is also invaluable to hear from campaigners themselves.  However involved you’ve been with NHS campaigning – whether you’ve just signed a petition once, or whether you’ve established a campaign group and led rallies – I am keen to hear your story.  By understanding these stories, I can better understand what the NHS means to people, and when and why and how people have, historically and today, made the shift from appreciation for this Service in to political action.

If you’d be happy to tell me more, please do consider contributing any photos or memories at our project website here.  It is free and simple to join up.  You can also email me directly at J.Crane.1@warwick.ac.uk, or fill out my short survey for NHS campaigners.