Surveying the NHS, by Eve McKeown

We are delighted to have a guest post from Eve McKeown, a first-year undergraduate in the History Department at the University of Warwick, who has been working with Jenny Crane to talk about surveys, age, generation, and beliefs in the NHS.  It’s really interesting and useful for us to hear Eve’s views on how age, further broken down by student-status and area of subject-specialism, may shape public views over time.

When thinking about the People’s History of the NHS, many would be reminded of Nigel Lawson’s statement that “the NHS is the closest thing the English people have to a religion”. After asking two groups of people, a group of University of Warwick History Undergraduates and a group of older NHS campaigners the question “What does the NHS mean to you?”, many of the responses reflected Lawson’s statement, demonstrating the support for the NHS amongst the population.

A surprising result of the surveys was that the NHS campaigners have a more personal attachment to the NHS, whereas overall, the undergraduates viewed the NHS as a service to wider society.

Amongst the results of the NHS campaigners, the frequency of the response that the NHS is “everything” to them is common, showing the personal connection to the NHS which they have. This could be because of their roles in campaigning for the NHS, but also due to the things which the NHS has done for these people in providing healthcare which is free at the point of demand. Another response said that the NHS means “My life and existence”, and there were similar responses frequent throughout the results. This is almost expected due to the dedication NHS campaigners would have for the service, as they have spent time campaigning for it. The effect on collective society is not mentioned, despite what we may expect from people who have campaigned for a national service. 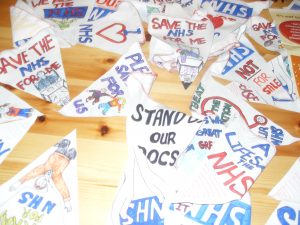 Amongst the University of Warwick undergraduates, many replies had a patriotic nature, viewing the NHS as something Britain should be proud of, with one participant describing the NHS as “a organisation of significant value which not only improves the lives of the British population but also the status of Britain nationally. It is one of the main reasons Britain is an attractive nation to the rest of the world”. This socialistic patriotism demonstrates the wider view that many of the responses by the Warwick undergraduates had, beyond their own personal benefit of the NHS, differing to the responses of the NHS campaigners. The socialistic nature of this patriotic response could be due to the group of Warwick history students are stereotypically more socialist leaning than older generations, due to their age and occupation, but demonstrates the collective perspective which the responses had.

Even the more negative responses focused on the political nature of the NHS, showing the wider perspective and political nature of answers of the Warwick undergraduates. This is demonstrated by one participant’s response, who said that the NHS is “A means of state intervention which makes healthcare more convenient, even feasibly accessible, to consumers, but makes it devastatingly less convenient to the government, nation and wider citizenry of the UK. It may also become a means of political control by the state by denying healthcare or making it harder to access for perceived dissenters from government or mainstream public policy and culture.” This demonstrates the focus on political theory amongst many Warwick students, though this could be due to their interests in studying History, a discipline similar to that of political theory, rather than the age of the participants. 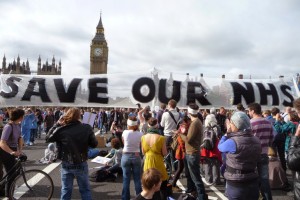 A similarity between the two groups of responses was the element of fear in regard to the underfunding of the NHS with the Conservative policy of austerity. This is reflective of the current state of the NHS, as it is struggling with the funding it has, as well as being reflective of the extent to which the British population support the NHS.

Despite the differences between the two groups’ perspectives on what the NHS means, the main theme which came across from the responses from both groups was the gratitude there is for the NHS, showing how highly in regard the NHS is held. This somewhat supports Nigel Lawson’s statement that “the NHS is the closest thing the English people have to a religion” and presents the people’s current view on the NHS to be one of support, whether it be support through socialism, patriotism or personal attachment to the NHS.

Jennifer Crane @jenny_crane
So happy that the full manuscript of Placards, Posters, and Prescriptions: Cultural Histories of the NHS has positive peer…
About 1 hour agoRetweeted by NHS History
ReplyRetweetFavourite

NHS History @NHSHistory_
Please do share your NHS stories, memories, and reflections with us at peopleshistorynhs.org or get in touch at NHShistory@warwick.ac.uk!
28 May
ReplyRetweetFavourite

NHS History @NHSHistory_
Between now and the end of the project this summer, we will be publishing a comic book with your stories at its hea… twitter.com/i/web/status/1…
28 May
ReplyRetweetFavourite