2018 marks the 70th anniversary of the National Health Service (NHS). It emerged out of the devastation of Second World War and helped unify the country, offering for the first time much–needed free healthcare for all, as Harry Leslie Smith attests:

Growing up in Britain before the NHS, when one’s health was determined by one’s wealth, and after 1948, when free health care was seen as a cornerstone for a healthy economy and democracy.

One of the provisions offered by the new Service was free eye examinations and spectacles for children and adults. For many families at this time, spectacles would have been considered a big expense and only affordable through schemes like National Health Insurance. The public demand went way beyond the government’s initial expectations, costing in the first year alone almost five times more than predicted. This figure did not decline the next year, instead it nearly doubled, with patients waiting up to 18-months before they would receive their spectacles.[i]

Under the guidance of the Ministry of Health (MoH), NHS glasses were mass-produced, regulated and robust. The scheme’s focus was firmly on function not on fashion. In 1948, the NHS offered a range of thirty-three33 frames, available in three materials: nickel, gold-filled and cellulose acetate (a type of plastic). It would be another thirty-five years until a completely new design (the 924 ladies frame) was introduced in June 1983.

For children the options were almost as limited, but from the 1970s they had the choice of coloured acetate frames in the following hues: ice blue, crystal, flesh, light brown mottle, dark brown mottle and black (ice blue shown in fig.1). One point of difference in the design of the children’s spectacles was that the arms curved inwards and the feet were made to circle around the child’s ears, in a bid to keep the spectacles from sliding off during play. These design features may have prevented the glasses from falling off, but could also make them pinch painfully. 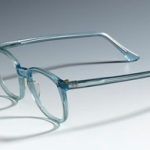 The NHS programme for glasses and eye examinations followed a precedent set by the wartime Utility Scheme, and the MoH went to great efforts to control the market for glasses in Britain. The MoH denied NHS licenses to frame manufacturers to produce new designs and opticians were prohibited from advertising non-NHS glasses or displaying them.[ii] The limited number of design options for NHS glasses was part of the government’s strategic economic measures to keep costs down. A negative consequence of the limited range meant that NHS frames were easily recognisable and would later became a social stigma. They marked the wearer as someone whose financial circumstances qualified them for free or subsidised healthcare, as Barbara Castle, Secretary of State for Social Services, identified:

The nub of my point is that a good-looking pair of spectacles in which the wearer can feel self-confident is genuinely a need in a society like ours: it is a need which for many the NHS is not fulfilling. We must not force people to wear out-of- date frames like a badge of poverty across their faces. (Optician, 1976)[iii]

From the 1960s, wearers who wanted individuality and could afford to pay, were able to purchase a hybrid version of the NHS spectacles. The hybrids fitted NHS lenses into a private frame. But for many, it wouldn’t be for another 30 years that they would have to find an alternative to NHS spectacles. In 1986, the NHS stopped making glasses in a cost-saving bid and introduced a new voucher scheme.

Spanning the period 1948 to 1986, the NHS offered high quality, if not high fashion spectacles and free eye examines. For many people, the cost of glasses had been financially prohibitive, and the scheme offered them their first pair of glasses. Sadly the scheme’s success was part of its downfall, with demand outreaching supply and budgets. As a child who wore NHS glasses, I look back on them with a sense of nostalgia. I recall how they slipped down my nose and bore into the side of my head. It’s now over thirty years since my first pair of ‘flesh coloured’ pink NHS spectacles and it is with some bemusement to see how similar my current specs reflect my first (fig.2).

My favourite NHS object, reflections on glasses by Helen Clifford

The NHS’s website: The History of the NHS in England

[i] Anon, NHS Spectacles, free glasses for all…for a while. The College of Optometrists website: https://www.college-optometrists.org/the-college/museum/online-exhibitions/virtual-spectacles-gallery/nhs-spectacles.html, accessed on 5 December 2017