‘Keep this page for reference!’: Early newspaper clipping about the NHS

We have recently received photos of many exciting NHS-related items, sent to us via twitter and also by email (NHSEngage@warwick.ac.uk).  We have seen mugs to celebrate new IT systems (who knew that was a thing?), old staff ID badges, and photos of protests and placards from years gone by.  We’ll be writing more about these wonderful objects, but today will highlight just one, a newspaper clipping from the Daily Mirror on 26 January 1948 (see below). 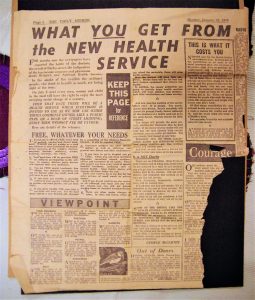 A photo of this clipping was sent to us by Haydn Wheeler, having been carefully cut out and collected at the time by his great, great, grandparents.  The cutting was then passed to their son, then to the daughters’ of his sister-in-law, and then on to the son of one of these daughters (Haydn).  That the newspaper clipping was preserved so carefully, and passed down this complex web of family networks, testifies to the significance with which it was and still is held.  Somewhat presciently, the article itself asks readers to ‘Keep this page for reference!’, and we wonder if other families also were so diligent in following this instruction!

The clipping provides a fascinating insight into this key time, writing about the excitement for ‘the ordinary people, who stand to benefit so much’ from this ‘most sweeping social change of a century’, the introduction of a health service free at the point of use, regardless of means.  This helps us to capture the excitement and wonder which many felt at the inception of the NHS – a point reiterated by a memory recently submitted to us, whose author, when hearing about the NHS on the radio aged 16, climbed a tree looking for others to share her sense of delight and exuberance with!

This clipping also helps us to build a richer picture of mixed emotions around the inception of the NHS.  The article opens by emphasising that for months ‘the newspapers have reported the battle of the doctors, the revolt of Harley street, the indignation of the top-income surgeons and physicians about Britain’s new National Health Service.’  The British Medical Association were not immediately convinced by the proposed shape of the new NHS. This newspaper clipping helps us to think about how the public reacted to such medical-political unrest, and the piece argues that disagreement made members of the public lose sight of their excitement, or even doubt that the service would appear.  Adding further complexity to our picture of the early NHS, the article is also at pains to highlight that this service is ‘NOT charity’, and that some services ‘like the health services, cannot appear overnight’, because of a shortage of building materials, and that there also ‘may be too few dentists’.  Excitement about the new NHS was tempered by understanding of its limitations in service provision, and concerns about how it was funded; debates which have continued throughout the institution’s history.

This piece then captures social excitement at the founding of the NHS, but also some doubts and anxieties members of the public felt about charity and lack of certain services.  That the piece was kept and passed from family member to family member tells us about the continuing significance of this institution, and the social interest in its history and founding myths and tales!

If you have anything similar or related to this, please do let us know; write below, email NHSEngage@warwick.ac.uk, or tweet us @NHSHistory_.  We’d love to learn more about this!

One thought on “‘Keep this page for reference!’: Early newspaper clipping about the NHS”